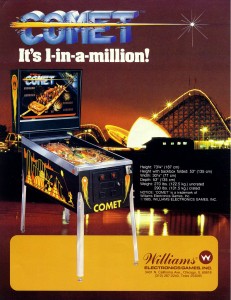 I am sure most of you have followed the landing of “Philae” yesterday, the mobile science lab of space probe “Rosetta” sent out by the European Space Agency in 2004. Aside from this groundbreaking scientific achievement and all its technological details, there is a surge in contemplating when and how humanity will reach deeper into outer space and eventually colonize other planets. Science fiction would have become science fact, some say, because the landing of “Philae” can be considered a major breakthrough.

Of course, pinheads know some things or two about landing a metal object on a delicate spot since quite a while now. They are also very familiar with orbits which can be found on almost every pinball table. Though it’s difficult to get more than three complete turns through flawless combo shots, pinball orbits are always a good target to get the ball back into the upper playfield, into the most interesting area of every game. It’s just like defying gravity and getting a rocket off from Earth into space.

There are several science fiction themed pinball tables like “Stellar Wars”, “Buck Rogers” or one of many “Star Trek” and “Star Wars” machines. But there are also pins that cover real space exploration. Think of “Space Station” (1987), “Apollo 13” (1995) or one out of three (!) different “Space Shuttle” tables, the youngest produced by Williams in 1984 which we took a closer look at The Ball is Wild here. As the heritage of pinball is rooted in US-American entertainment culture, you obviously only see the space travel achievements of the US depicted on the cabinets, the backglasses and the playfields of those machines. Accordingly, science fact pinball tables can also be considered hommages to the people who served and serve at NASA and similar organizations. It supposedly should also reassure our dedication for colonizing space – even in times when budgets are cut and the many political, economical, religious and military disputes temporarily dwarf the passion of going into space.

The most fitting pin for the landing of “Philae” on the comet “67P/Churyumov–Gerasimenko” is without any doubt the Williams machine “Comet” from 1985. Although its theme is actually about a funpark rather than space faring, “Comet”  features a techy futuristic vibe, a fiery comet’s tail and the eponymous ramp where you can ride the Comet. And what do they say about science? If you get the kids interested through toys and a colorful presentation, you are preparing for the next generation of successful scientists, engineers and astronauts. By the way, “Comet” was only the first of a trilogy. Because a comet is not enough, the pinball world later reached out to “Cyclone” (1988) and “Hurricane” (1991). Just like science will one day not only make it possible to land on Earth’s moon and a faraway comet but also on another planet. Until then, enjoy some pinball!