Playing on a pinball machine is an experience you can never completely simulate as a videogame. But as someone who grew up in the 80ies and 90ies, I got to know both pinball tables and video pins at almost the same time. Videogames were much closer to me at a very young age though while the love for pinball developed later, in my young adult years. The thing is: Videogames and pinball have never been opposing forces to me, they are rather perfect partners in crime, both in arcade culture as well as in the world of electronic gaming as a whole.

While every physical pinball table provides a unique experience, video pins can take the basic idea and elements of pinball and come up with something you can’t build in the “real” world. The earliest example of the endless possibilities of video pinball for me was the “Enigma” table that came with “Epic Pinball” back in 1993. It features a psychedelic background, items that pop up out of nowhere on the playfield and ramps where the ball disappears and reappears elsewhere. Moving text instructions are floating on the screen and the table is divided into different levels with each level demanding the player to hit certain targets that pop out of thin air.

In recent times, both “Pinball Arcade” by Farsight Studios as well as “Zen Pinball” (or “Pinball FX”) by Zen Studios have established themselves as solid video pinball games with mostly accurate ball physics. Some players enjoy the look and feel of the digitally recreated pinball tables by Farsight more, others stick with the newly Zen pins. Either way, both series are here to stay and see releases of new tables on a regular basis.

But what about other advances into the modern world of video pinball? There are not that many interesting choices, unfortunately, so I was really excited when I first heard the news about a videogame project called “Rollers of the Realm” maybe one and a half years ago. It was a bold concept: Pinball meets RPG. This doesn’t really make any sense at first but the basic idea is quite simple: Each character of your party is represented as a ball. There is the big, heavy and strong Knight, for example, or the smaller Healer. The party leader is a Rogue, a brave teenage girl with her multiball dog buddy that roams around the realm to do some pickpocketing to get around.

Last week saw the release of the game (Windows/Steam and PS4 or PS Vita as Cross Buy) which was reason enough for me to instantly dive into the adventurous pinball realm of Canadian developer Phantom Compass. First things first: “Rollers of the Realm” isn’t a simulation and doesn’t want to be one. It has decent pinball physics that work well but you shouldn’t expect all your usual trickery that you can pull off on physical tables to work here. That having said, it is entirerly possible and also necessary to do aimed shots and basic ball control. Things like drop catches also work. There is no classic nudging feature, instead you can tilt the ball (not the tables, mind you) left and right to prevent the ball from draining and also for doing effective enemy hits. Hitting and clearing out enemies is important as they hit you constantly. The ball doesn’t suffer from that but your flippers do! If you don’t take care, archers will shoot your wooden flippers into little stumps. If this happens, it’s an awful sight, of course. Because what is left for you as a pinball player if they cripple your flippers, your most important form of interaction? 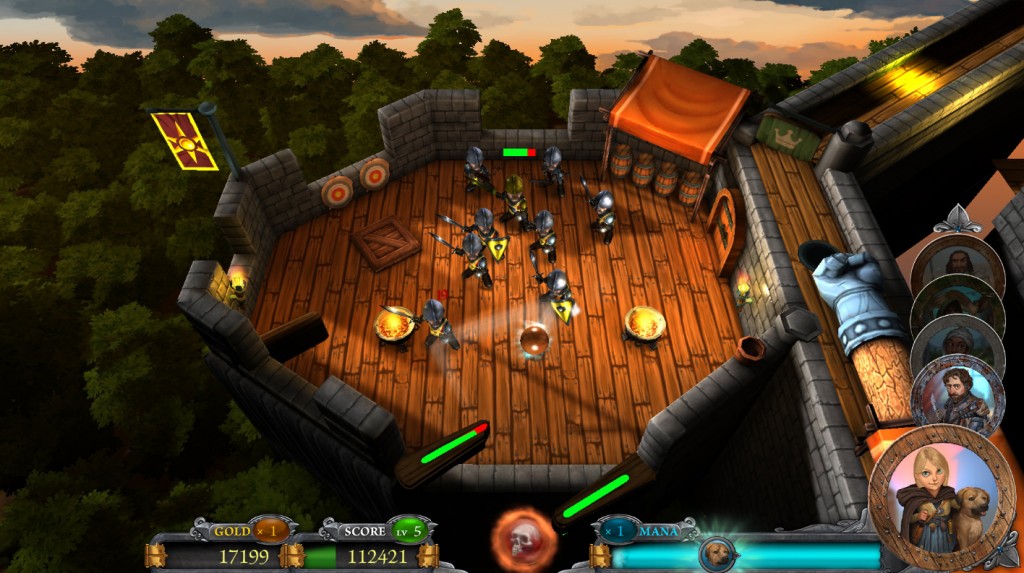 Needless to say, “Rollers of the Realm” is all about combat. The levels/playfields of the game are mostly basic in design, but it’s the characters and things on it that make it interesting. Tougher enemies take more hits before they can be defeated, others – like little zombies – just walk towards your flippers and try to nag them down if you don’t clear them out soon. Aside from common pinball techniques like trapping the ball or alley passes and aimed shots, the strategy lies within the selection of the character that you play with. When you start off the game, you only play as the Rogue. Later on, you meet other pinball characters like the Knight or the Hunter who join you on your quest and who you can select before you plunge the ball into the game or when you cradle the ball with one of the two main flippers. Each of the characters has different statistics, they are all different in size and weight and also have some special tricks up their sleeves. The Hunter can clear up mice and bats, for instance, and won’t take damage in experience points in doing so. Because, as this is not just pinball but also a roleplaying game, there is no highscore. Instead, you collect gold and experience points and advance in experience levels. With gold, you can upgrade your characters so they become more efficient in battle and during the activation of their special abilities.

The story is a basic fantasy tale of a medieval land, ancient demigods who protect the land and an arcane witch who supposedly wants to turn the realm into chaos. Not so basic are the characters: Every one of them is a unique personality, both in looks and also in the way they see things and how they communicate with the other party members during the cutscenes. The tale of a teenage girl fighting her way through an archaic male-dominated medieval world without any magic tricks is a welcome change to a lot of female characters in video and pinball games that tend to be stereotypical in looks and narrative. There is also the Knight, an important ball in the game, who is an old drunk and knows that his best days are over. Other characters like a persian swordsman or the African healer bring in diversity through different ethnical and cultural backgrounds. As the story of the game is not very deep, those characters are not developed very deeply either, but it is still nice to see that the game developers have really put some thought into their virtual cast. 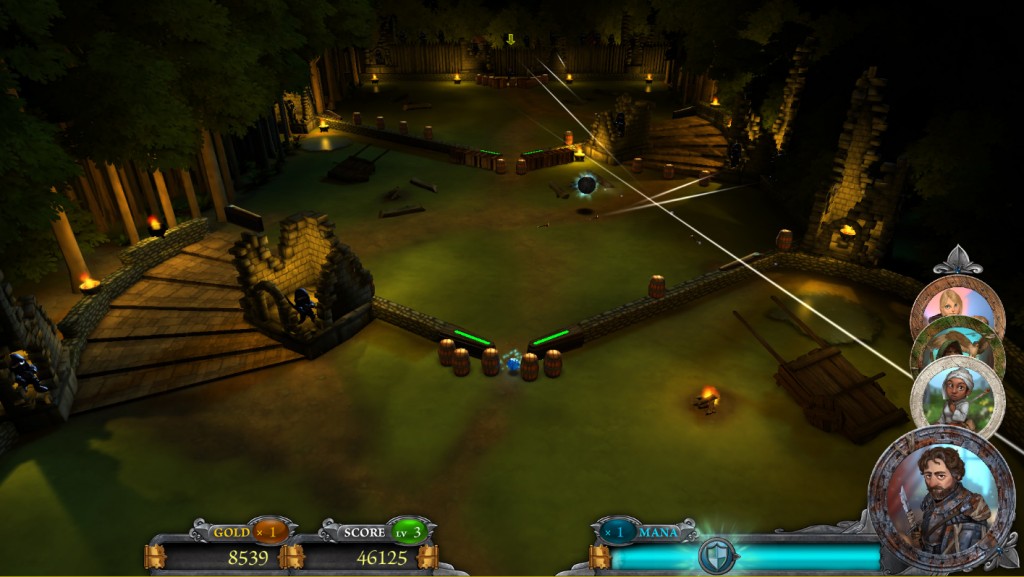 Aside from the constant combat playfields – some of them really huge in size and also linked together sometimes -, “Rollers of the Realm” also features some puzzle segments where you don’t flip and only use the tilt feature to move your ball around. It’s a nice break from the melee action and something that I would have liked to play a little bit more. Still, you have enough to do with shooting the bad guys and prevent your flippers from getting shot down at the same time. Changing the balls/characters can get quite stressful at some points. The Healer is needed very often due to the fact that she can fix those broken flipper fingers the quickest of them all. If you lose her or other balls, you can revive them one after another – but only if you have enough Mana left. If you don’t and your flippers are shot down, it’s basically Game Over most of the times. Although “Rollers of the Realm” isn’t a particularly hard game despite some tough sections here and there.

“Rollers of the Realm” is an experiment for both passionate pinheads as well as avid videogame players because the game truly is a hybrid between pinball and a computer RPG. Despite not being a simulation, the game features solid ball physics and also a fast paced gameplay. Although the story isn’t very elaborate and the content of the campaign (with some additional challenges) is easily manageable if you put about 8 hours into the game, “Rollers of the Realm” does pioneering work: Such a game was never done before and has therefore to be applauded. Also, technically and in terms of art and game design, the game provides a satisfying experience that will interest pinball players and videogame fans of all ages and skill levels alike.

“Rollers of the Realm”, published by Atlus, is out now for Windows/Steam, Playstation 4 and Playstation Vita. The Ball is Wild also did an interview with three members from the development team Phantom Compass from Toronto which you can find here.