Electronic handheld and tabletop games were a big thing back in the late 70ies and early 80ies. Home computers and game consoles were already around at that time, but nothing could beat the impressive fact that you can take some of those games with you to … basically everywhere! To the backseat of your parent’s car, to the beach, to school. This was something very special 35 years ago. I remember being completely sucked into my sister’s Game & Watch in 1983 when we drove from Austria to Switzerland to our resort. All her previous highscores got topped pretty quickly throughout this drive which made her lose interest but contributed to my lifelong devotion to games culture.

Picking up a handheld or tabletop now, it’s hard to completely understand the fascination those games had back in the days. Sure, if you’re a collector, you still have a lot of interest in them. Also, their appearance and design always evoke attention if you show an old handheld or tabletop around. People get amused by the technical limitations and the crude audiovisual feedback, play a game or two and then quicky disregard it. The reactions might have been similar when those games were originally released but the sheer enthusiasm coming from the fact that they represented a new age of electronic and digital entertainment that was just about to kick off would be enough to sell a lot of units. Of course, children didn’t care about what the future holds, they enjoyed the colorful presentation and the electronic plastic, those magical moving lights inside a toy that otherwise didn’t look unapproachable or complicated at all. Once they figured out how to play and to score, their parents had a hard time seperating them from their games and getting them to join the dinner table. Just a minute, mom! 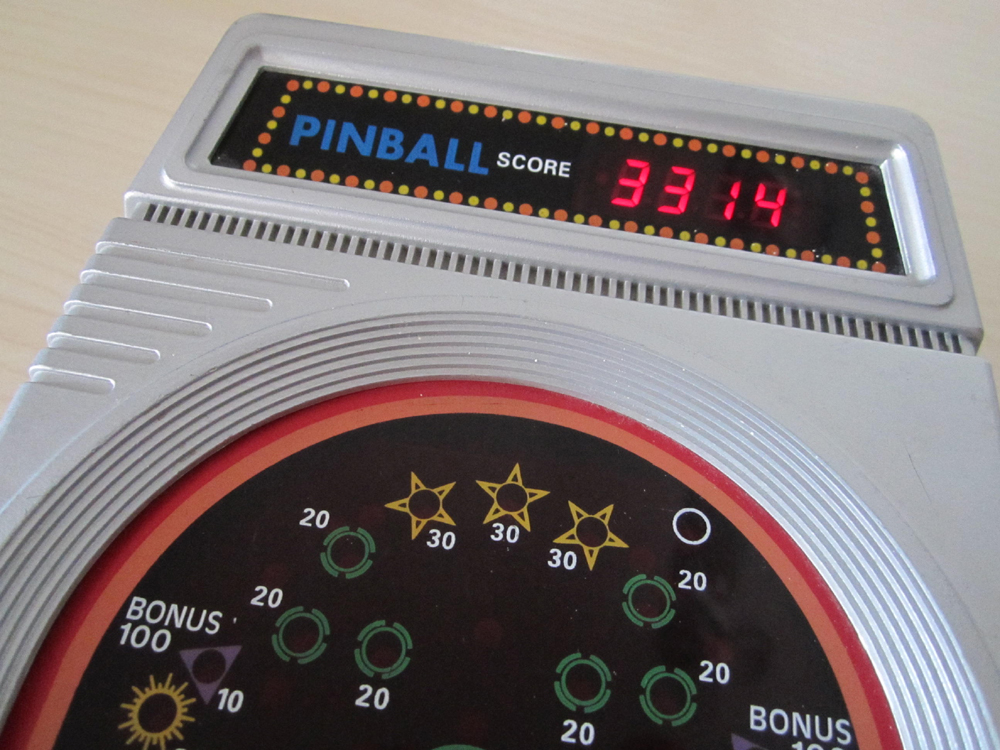 Pinball handhelds and tabletops have been equally appealing for the target audience as their videogame equivalents. Pinball was something that kids in 1980 and around that time were familiar with. They were placed right next to other game cabinets, were present at bars and could be found at different public spots. So, for home entertainment, alongside with simple ports and copies of popular arcade videogames of the time, handheld and tabletop gaming would always mean pinball, too. Owning a (new) pinball machine was unthinkable at the time unless you were the lucky kid whose parents were pinheads or arcade owners and operators. The idea now was to put one of those huge, bulky machines into the palm of your hands so that it not only becomes your own but it now would be smaller, compact, clearly arranged. Tamed.

The drawback was that the game experiences were much simpler. While premium pinball tabletop models like “Atomic Pinball” (1979) from Tomy did feature real physical elements – a small silver marble, little pop bumpers, flippers and a plunger – their electronic peers only had a limited number of spots on the playfield for both the indication of the “ball” and targets that were hit. When a ball spot lights up, it represents the current ball position. Ball movement means that the active spot goes dark and an adjacent spot would light up. Playing such a game now demands a certain level of abstraction to get into it and have a decent pacing that prevents you from draining the ball instantly. But then you can also choose to just spam the flipper buttons so that the chance of ball loss decreases significantly. Designers saw that problem though and so with some games, spamming the flippers interestingly leads to a tilt.

The Ball is Wild will go into further detail with two of those old handheld pinball games in one of upcoming next stories. Until then, I want to share a funky commercial with you.