The sensation of playing pinball lies in indulging in a beautiful mess of fast ball movement, colorful blinking lights, illuminated surfaces and a neverending symphony of sound effects, ranging from the ringing bumpers and slingshots to the legendary knocker sound that loudly and proudly indicates that you’ve just won a replay. People who are not used to playing pinball and don’t care that much about the individual ruleset of a table often enjoy this sensory overload. They mostly don’t really know what’s going on and how to play properly but enjoy the sheer bliss that goes along with everything blinking, ringing and the ball moving around like crazy. No wonder we often hear analogies to pinball if someone wants to describe something that is intense, highly dynamic and out of control. The ball is wild indeed. 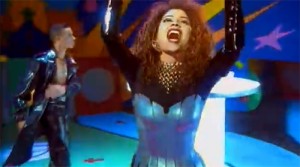 It’s interesting that a lot of pinball tables (as well as arcade videogames) have this built-in advice that says “Winners Don’t Use Drugs”, which dates back to a weird deal between a former FBI director who made the arcade industry include the slogan in the games in the 90ies. But what did this slogan want to tell us exactly? It could either mean that if you’re good at the game, your self-confidence rises up and you won’t have the need for drugs anymore. (Chances are higher that you won’t be that satisfied with your playing performance at first, though – unless you find someone with a lower skill than you.) But it could also mean that the experience of the particular game is such a thrill and a wild ride that the sensation is equally spectacular as if you were doing drugs. If you think about how brand new electronic arcade games were received in the 80ies and 90ies after they just came out, this might not sound so far off. The magic of pinball and videogames is often a geek’s savior from falling into peer pressure of the so-called cool people who make you try out things that you actually don’t want to. Electronic arcade games in those days not only provided a proving ground for everyone who took on the games’ challenges but also exposed us to an audiovisual stimulation that was flabbergasting. Similar like how you feel after you’ve consumed certain drugs, maybe. Only by playing games, you chose a safer and also legal alternative to going to shady clubs and trying to find some strange guys who sell you hallucinogenic substances you don’t know anything about.

So you let yourself go into an experience that you try to understand and to control, but that does everything from preventing you from doing so at first. It’s loud, it’s colorful, it’s wild. What are you going to do about it? You practice, learn and improve. Or you can simply enjoy all the lights, sounds, animations and movements and not overanalyzing it too much. There is a great slogan in German which says “Wenn dir etwas gefällt, analysiere es nicht, sondern tanze dazu”: If you like something, don’t analyze it but dance to it. The quote which follows up would be: Dance like nobody’s watching. And what do we get if we mix up pinball culture, sensory overload, dancing and revelling in the action? Exactly: A famous Eurodance group from the 90ies sweating it out on a giant pinball table.