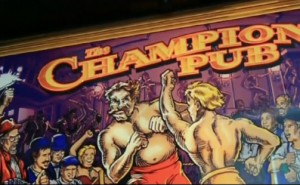 I grew up in a time when pinball was already a narrative driven experience. Everyone who has seen or played a pin pre 1978 knows that this has not always been the case. Machines up to that time usually had very generic and uncreative themes like card games, recreation, music, sports and pin-up girls. Although some of these pins feature nice artwork on both the cabinet and the backbox, the games themselves mostly lack an interesting gameplay. The electro-mechanical machines usually only come with standard pinball elements like drop and stand-up targets, holes, some lanes and maybe a ramp. Rarely you see toys or targets that are made for one (of those older) pinball machines exclusively.

Don’t get me wrong, playing an EM can be fun, too. Some of them actually invite the player to create specific playing techniques and offer a dynamic, fluid gameplay. Still, the home of modern and competitive pinball are the machines from the 80ies onwards. Before the pinball market crashed around the year 2000 and left Stern Pinball the only existing manufacturer for almost a decade, some exeptional tables with incredibly deep rulesets have been produced. You can see that the designers of the late 90ies tables had to come up with something really special to be able to compete against fancy arcade videogames and also the rising power of the Windows PC and the new line of videogame consoles of the likes of Sega Dreamcast and Playstation 2 that should arrive just a few years on.

In 1998, along with “Medieval Madness” (one of my favorite machines) and also other sought after tables like “Cactus Canyon” and “Monster Bash”, there was “Champion Pub”. It has no pop bumpers but so many other features and gadgets that you can experience. Most strikingly, there is or course the boxer, the big center target where you can win (or lose) your boxing fights. But then you can also decide to practise and master just those other two mini-games on the upper left and upper right corners of the table. Do you like to skip rope or prefer hitting the small punching bag with your small little plastic fists? One pinball machine, a lot of things to explore and many ways to score. Let’s take a look at The Ball is Wild’s newest tutorial video featuring “Champion Pub”!