I just came back from a pinball tournament in Lower Austria. It took place inside an old barn, beautifully restaurated, which is host to about 15 playable machines. They are not in perfect but overall good shape. They’re not the newest machines either. Instead you can find a lot of 80ies and 90ies tables there, by the likes of “Creature from the Black Lagoon”, “Taxi” or “Earthshaker”. The organizer is head of Austria’s main pinball association. He pays for the rent, and the machines we played on at the tournament are his own. Obviously, everyone who participated in the tournament payed a fee. Some payed a little bit more to cover the expenses. This is the only way to keep something like this running. Everybody knows that pinball is not a hobby (or a sport) where there is much interest from potential sponsors involved. It’s too niche and too obscure to be consired worthwhile, and although the recent resurgence in pinball culture (successful videogames, boutique manufacturers, etc.) is an amazing development: It won’t change the character of the international pinball community which has no mainstream appeal whatsoever. 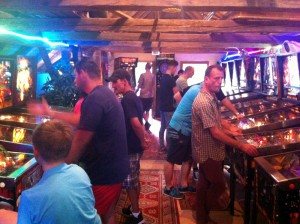 Of course, there is also the public side of pinball – which is the main reason pinball was invented in the first place: It was about entertainment machines that have been put in amusement arcades or different public places to attract customers so they would approach those heavy, bell-ringing and flashing things and put money in them. That’s the business model behind pinball. And the fact that the machines are less to be found in public places and more in private homes by now, is only the result of a lost war to arcade videogames and home entertainment in the late 90ies. Pinball in private homes is a good thing of course, because it means that collectors basically saved pinball culture from dying out and made it possible to sustain demand and also bring the silverball back to the places where it belonged all the time: in public places, for everyone to be seen and played. It’s happening real slowly though because after the scarce years of the 2000s, you still won’t find many new pinball machines popping up in arcades or bowling alleys fifteen years after they almost vanished from the public landscape alltogether.

Between the few public places you can just go and put a coin into a pinball machine that stands there, and the private collectors which you have to be at least be aquainted with (because otherwise they won’t invite you or you won’t know about them), there are the special places provided by enthusiasts and associations. Places like the old barn in Lower Austria where the community can meet up and play but where also everyone else is invited to come and try out some games of pinball if he or she so desires. Still, those places are invisible to most of the people who are not decicated to pinball and the community behind it. But it’s not about visibility (although this is also a problem), it’s about the possibility that everyone can come and join. In the end, this is what pinball is all about and it’s something that should be cherished. 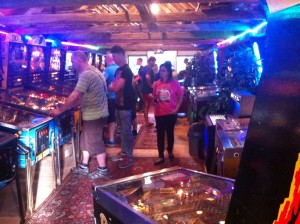 How visible and approachable is pinball?

The guy who runs the old barn with the 15 pinball tables has recently lost his motivation of continuing his activity and has announced that he wants to close down his space in the near future. I can’t blame him: He has to pay rent, organize tournaments, service the machines and motivate people so that they would come and put some sense into all this effort. It’s a little bit much to ask for one person for longer than a year (he also had to move his collection several times in a short timeframe). What lies behind this story is a debate every pinball community has to solve on its own: Where can we meet up? Where do we want to play? How public do we want to be? It’s a tricky task, because, again: no sponsors, no real public interest.

It’s tempting that everybody just buys his or her own machines individually, put them into a basement and have fun with friends (and maybe also friends of friends). But the problem is that this pushes back the places where pinball culture is available for everyone and where it can be discovered by folks outside the scene. It drives motivation away from those few awesome persons who just start something for everyone else’s benefit because they know that otherwise no one will do it. Having pinball – and especially tournaments – confined to private basements and collector’s rooms makes it impossible for the culture to become relevant and interesting again. When everyone does their own little private tournaments, it would also render competitive pinball obsolete after a while. Because when no one knows about certain tournaments except a hand full of people, what purpose does this serve? Aside from the fact that it warps real competition when you just go up against some people you know instead of real challengers. Transparency is already a problem when it comes to tournaments: By now, many of them are quasi-private tournaments that would still give out WPPR points. And even for those that are really public, it’s often not easy to know where and when you can register for them if you don’t follow the associated communication closely. (By the way: The best place to keep you informed is the “Diary” section at Pinballnews.com.)

I know that nobody wants to invite strangers into their homes. I also have a small basement for the three pinball machines that I own where only friends and family are invited. But I would never compare this private space with the people and places where real pinball culture is happening: in the arcades, in the public, maybe in museums, but definitely at community driven venues like the old barn in Lower Austria. Let’s keep those places alive!

2 comments on “Pinball in the public”