I just came back from a visit at one of the few game arcades that still exist in Vienna. I went there after watching a film. Both the movie theater and the arcade are located in a generic mall. This doesn’t bother me really, rather the contrary, because a mall mostly equals a lot of space which isn’t so common in a big city – especially in Europe. The arcade is located in the basement of the mall and it truly is big: They have a bowling alley, many pool tables, air hockey, table soccer, a lot of videogame cabinets and also four pinball machines. The place was never famous for its well serviced machines. Although if you know which machines are in an okay shape and you come with a group of people where skill doesn’t matter that much, you can definitely have some fun.

They switch the pins from time to time. Mostly, they have newer Stern tables on display: Transformers, The Avengers, Avatar. They put away Tron and The Addam’s Family some months ago and brought in a Corvette instead. This one is so badly lit that you can’t play properly because you don’t see anything. This problem can be dealt with by having an older, slower machine but not so much with a faster table where you are supposed to show your quick reflexes. Anyway, the thing is that I wasn’t expecting much when I went there. I was hanging out with a friend, so we just casually played along. But the bad condition of those pins still managed to amaze me. Two of the four machines had their right flipper button removed so that you obviously couldn’t press the button anymore but played with the plastic stick instead that sits behind the button. I haven’t experienced this ever before. Naturally, you can play for a while and it doesn’t matter that much, but in a frantic moment, your instincts take over and they are not used to a missing button. This was unexpected and annoying, but it didn’t stop there, of course: You had your usual crooked machines hanging either to the left or to the right, balls that get stuck all the time and balls that are missing. They just aren’t really missing, they are hanging in the ball tray or somewhere else where the ball search can’t find them. And do I really need to mention that the playfields never get cleaned at all?

I know that servicing pinball machines is a special kind of beast because there is always something that doesn’t work or causes trouble. I own pins myself and played enough pinball – casually and in tournaments – to know that it’s very important to always have a skilled helping hand nearby who can play pinball doctor so problems can be fixed in an instant. Nobody expects that every machine is always in perfect shape in an arcade, but my understanding stops when I notice that machines don’t get serviced at all or when the service seems to be a joke where nothing gets done. I refuse to believe that it doesn’t matter whether machines are in a bad or in at least a solid shape. Sure, you can try to squeeze those games out by not caring about them at all and just let them stand there until everyone stops putting tokens in them. If you complain at the counter, they give you back your lost tokens most of the time. But then, just a few people really take it on them to complain in the first place. 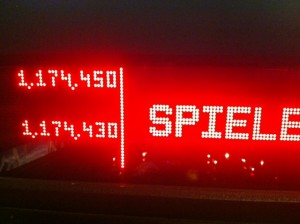 The first game with missing flipper buttons went bad – with almost exactly the same scores, too.

The solution? It seems to be the age-old thing of not accepting something that can be considered as bad treatment of the customer. I just wrote a complaint to the company that runs the arcade, politely stating all the things that don’t work with their machines and that I will stop going there eventually. Which I will do because I don’t get something out of it anymore anyway. So, fellow pinheads, who I suspect you to have experienced similar cases: Don’t accept it when pinball machines in the public are in a really shabby shape (unless they are on free play). Talk to the operator and mention the problem in a friendly but determined voice. The good thing is that there is always a place somewhere where the people who run it care about the shape of their machines. Good operators know that good servicing will pay off in the long run.