In addition to new physical tables that this year has brought us – Star Wars, Dialed In! and Guardians of the Galaxy spring to mind immediately -, 2017 was also a good year for video pinball. This is mostly because of the highly anticipated release of Pinball FX3, the new engine/platform from Zen Studios that brings their incredibly well engineered tables to new technical heights (more on that later). But we’ve also seen other solid additions to our digital pinball playrooms, both on mobile as well as on PC and consoles. Let’s give it up for a round-up of this year’s most interesting video pinball releases.

What we’ve been left off with

At the end of 2016, we had a bunch of interesting releases that helped us coping with the cold winter days and start off the new year. Last Christmas, we have been blown away by the glam-retro action of the ascending pinball game PinOut! by Swedish indie studio Mediocre. A little smaller in scope but incredibly charming was the winter wonderland that we could explore via our snowy silverballs: Snowball! by Pixeljam was a hidden objects pinball game presented in a lovely pixel art style with a lot of attention to detail. There were several flippers placed throughout the big and widely spread out playfield that were all controlled by tiny computer people powering our shots. Very sweet. Those of us who wanted serious business and strong highscores though played the Bethesda Pinball tables instead, which were released within Pinball FX last December. If you haven’t tried Doom, Skyrim or Fallout yet but are a fan of at least one of those series, you should definitely think about getting this table pack. The end of last year also saw the release of Pinball FX2 VR for all major virtual reality headsets but with only a handful of supported pinball tables. Freely inspecting a virtual pin with you head was still a blast though.

But let’s hop into the releases of 2017. On mobile devices, there seems to be a small emphasis on Breakout and pinball hybrids. Take Throw Pinball by Turkish developer Baris Intepe for example. It’s a basic but nice looking mini pin that features no traditional pinball design but instead dozens of small tables that consist of different colorful brick layouts. Naturally, instead of steering a paddle we use our flippers to shoot the blocks away. Throw Pinball isn’t special, but it’s almost free to play (no ads or in-app-purchases) and a nice distraction for when you have to wait for a few minutes for someone of something. But make sure to turn the sound on because the game features a decent synthwave soundtrack by chiptune legend Jeroen Tel. 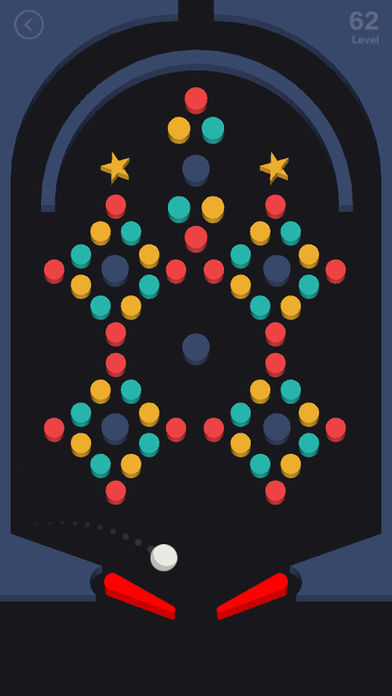 Another brick/pinball hybrid is Super Hyper Ball 2 by Neonchimp Games. The concept is similar to Throw Pinball except for the bigger playfield and the fact that here you have both: two flippers and also a paddle. Switching your attention between the paddle and the flippers can be a little annoying, especially when the ball gets thrown around very fast. The middle of the playfield changes from time to time and offers various shapes of brick designs and different goals to achieve. Unfortunately, Super Hyper Ball 2 is laden with in-app-purchases and ads. You constantly level up your character and can buy and equip certain perks – which distract from the game itself. Although there are some interesting modes (even a boss battle mode), the game is mostly frustrating and doesn’t present too much variety. As Super Hyper Ball 2 is free to play, it’s worth a look though. A newer tablet is recommended, as you can’t really make out the tiny game objects on a smaller screen and the game tends to become a bit laggy on older devices.

Another release for mobile devices has been published by none other that Farsight Studios of Pinball Arcade fame. Pinball Cadet, developed by Trick Gaming Studios from Argentina, has unfortunately been under the radar since its release in mid September, and one reason for that might be that the title is very similar to everybody’s (least) favorite classic Windows game Space Cadet – which for many is their only active memory of (digital) pinball in general. Another reason might be the underwhelming artwork and the fact that all the game elements are divided into small sections. You won’t make out anything until you give the game a shot and learn its design and concept. Pinball Cadet consists of multiple playfields connected with each other. Together they form a space vehicle. With certain shots – mostly through ramps – you can ascend from one playfield to another, trying to achieve different tasks like activating certain targets or shooting specific objects to progress through the missions. Pinball Cadet starts out modest but offers a well-thought-out table layout where precise shots are crucial to correctly navigate through the spacecraft. Other elements like paddles can be controlled aside from the flippers to keep the ball in the right place. The game borrows its concept from 16 bit video pin Devil’s Crush. And while not being as visually striking as this classic, Pinball Cadet should be way more popular than it is now. Also, there are almost no in-app-purchases here, just an ad disabler and – weirdly enough – a fourth ball that stays with you forever.

If you like the idea of pinball playfields going up and away but don’t want to struggle with missions and items – there is a quick fix for you, also available for Android and iOS. Ascending Pinball presents the most basic pinball playfield possible. What’s left is just your ball, two flippers and tilted platforms to your left and right. All you need to do is shoot for the next floor, find your new pair of flippers and repeat indefinitely. Ascending Pinball sounds plain boring but in all honesty it’s the Flappy Bird of video pinball.

Technically not new are Babylon 2055 and Quantic Pinball from French developer Shine Research, which have initially been released on iOS and Android in 2014 (a third table by Shine, Zombie Pinball, was first released in 2015 and arrived on Steam a year later) and came out for PC this year. Those games are nothing special at first glance: standard level design with a lot of ramps and some bumpers, floaty ball physics and the lack of a deeper ruleset. It’s not fair to write off Quantic Pinball et al. as bad though because they do have some noteworthy features to show for themselves. Each game consists of six tables (and a special seventh one) through which you are progressing during your run. You complete a table by shooting several ramps multiple times and then go for the exit lane. To mix things up, there are a bunch of multiball modes which you unlock quite easily by shooting a hole. Then one of those modes randomly starts and you get up to ten balls at once, sometimes combined with different lighting effects (like flashlight mode) as well as magnets or bumpers temporarily spreadout over the playfield. In addition to that, you can also lock balls and start a conventional multiball. Although the gameplay is very dynamic, there is not much variety to it which makes the games too repetitive after a while. Still, Quantic Pinball, Babylon 2055 and Zombie Pinball are nice for some in-between games where you just want to shoot some balls and not overthink it.

A very interesting video pinball project was released in Early Access on Steam in mid October. Pinball Wicked by German newcomer developer Formslingers is reminiscent of the good, old Pro Pinball series with all of its glory. The first table of the simulation, Black Flaggers (a pirate theme), offers a powerful simulation with beautiful lighting and animations, great ball physics with a tight and heavy feel on the virtual flippers as well as a decent table design that is on par with what Zen Studios has to offer. As with Pro Pinball Ultra (Steam release: Summer 2016), Pinball Wicked offers a lot of modification options, ranging from DMD customization and different camera settings to an operator’s menu for changing things like balls per game or ball saver durations. Even portrait mode is already possible and works well. The developers are busy in their efforts and offer at least one update per month. By now, Pinball Wicked: Black Flaggers doesn’t look or feel unfinished in any way. It really is an unsuspected surprise to see this project unfold. Granted, the price tag is a bit high and one could not be blamed of thinking twice about spending about 14 to 18 Euro (~ 16-21 US dollars) for an Early Access video pin with just one table. But it is worth the money spent. 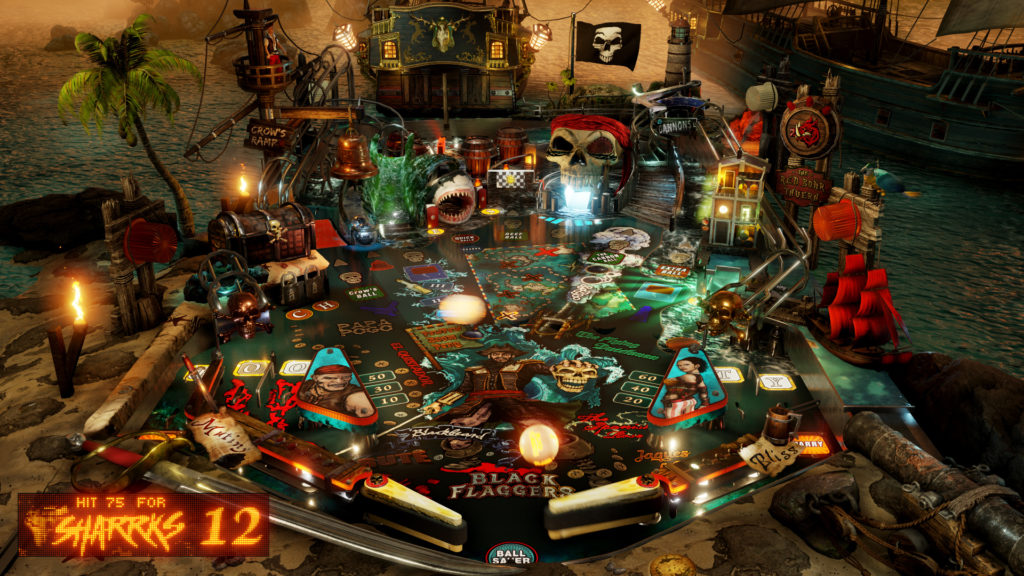 Without a doubt, Pinball FX still stands at the top of the podium when it comes to modern video pinball – in 2017 more than ever. After having celebrated its 10th birthday in April, Zen Studios’ brilliant simulation that features original table designs only, released in September with version 3. Pinball FX3 introduced an upgrade system, league play, tournaments, multiplayer matchups and of course a graphics update. Whenever it was technically possible, Zen Studios made sure one could transfer his or her previous purchases from Pinball FX2 to FX3. Only a few tables like Plants vs. Zombies or Ms. Splosion Man didn’t made it to FX3 – probably due to legal reasons. The release of Pinball FX3 also came with a brand new table pack: Universal Classics, featuring Back to the Future, E.T. the Extraterrestrial and Jaws. Back to the Future is an over-the-top multiball fest with Marty and Doc Brown travelling through time and all thre movies, E.T. is a quieter, well-rounded table with two additional flippers and classic mission modes, while Jaws‘ design is more unconventional with a steeper learning curve – and a ship (playfield) that wildly rocks in the wind! and All three tables are up to the already high quality standard of Zen pinball tables, with deep rulesets and lots of audiovisual variety.

December saw the release of Pinball FX3 for semi-mobile console Switch where the game can also be played in portrait mode and with the joy-cons detached. It takes a little time to get used to playing on a smaller screen when coming from an iPad, but the game runs smooth on the Switch. Speaking of portrait mode: This is a feature that’s not available in the Steam version at first. You have to contact Zen Studios to get a code to unlock screen rotation within the game. The reason behind this is because there were apparently cases where people put Pinball FX inside a pinball cabinet and placed it into a (public) arcade. Getting the code is no big deal, you just have to wait for a couple of days to hear back from Zen.

Where the initial release of FX3 saw the introduction of Universal Classics, the Switch port came bundled with another brand new table pack (which was also released for most other platforms): Carnivals and Legends, featuring two brand new tables Son of Zeus and Adventure Land. Both games are Zen’s own IPs, which comes as a nice variety because Zen mostly does tables for licenced IPs these days. Adventure Land is a frantic funpark themed game whereas Son of Zeus puts you in the (probably big) shoes of Hercules who has to stand up against Hera who constantly mocks him and wants him to get eaten by a giant snake. So go out there in 2018 and slay some serpents! Have a flippin’ good new year.

If you have any suggestions, hints or feedback on this article or The Ball is Wild in general or want to contribute, send us an email! You can also find us on Twitter and Facebook.