This story was written during Transatlantic Storytelling Summer School in Portland in August 2016, made possible by FJUM Vienna in cooperation with University of Oregon (School of Journalism and Communication).

Archer approaches the machine, always confident. He has about just the right height for reaching the machine so his hands can have a tight grip on the flipper buttons. There is a serious look on his face while he makes several strong shots before the ball finally drains through the right outlane. “Pinball is better than videogames”, Archer says while putting two more tokens into the coin slot of Stars, an early electronic pinball machine from 1978. “They’re virtual. Pinball is real”. 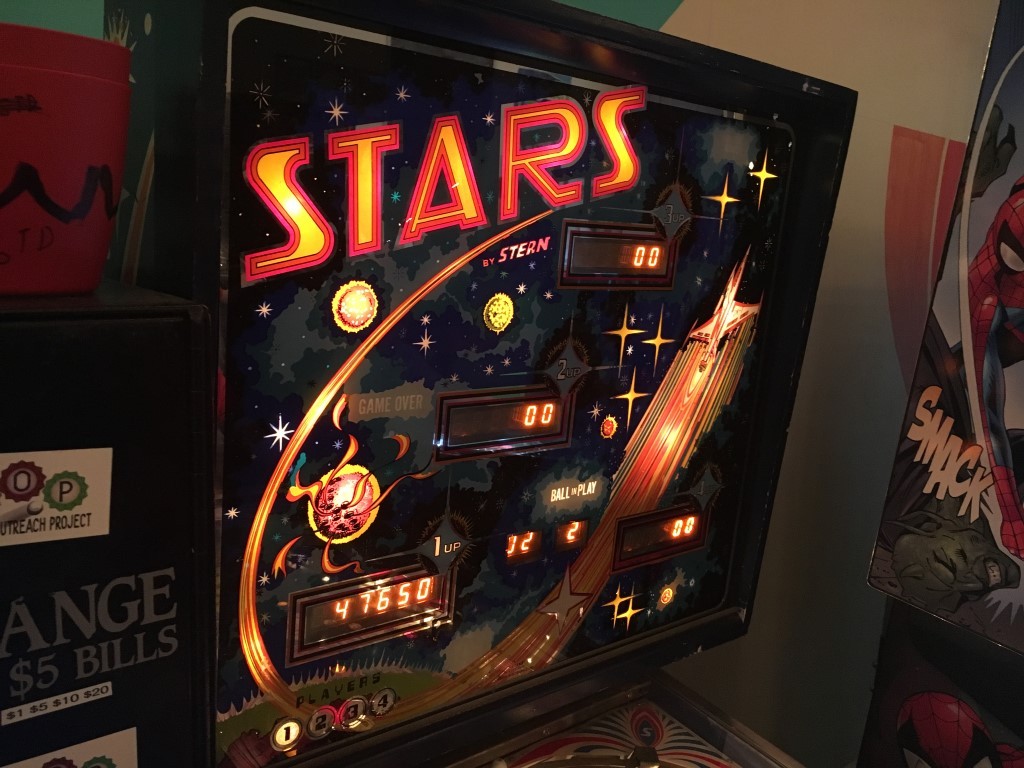 Archer is nine years old, with long, blonde hair, blue eyes and a cool-headed attitude. He wears sandals, bright shorts and a red t-shirt, typical for a common summer day like this. Archer is one of ten children in a room full of pinball machines that stand close to each other and are brimming with colorful lights. Bells, chimes and whistles dominate the background noise and there is lots of motion and movement going on under the glass panels — a huge amount of ding-ding and ka-ching for sure. It is the first day of Summer Camp at the headquarters of Pinball Outreach Project (POP), a public charity located in Northeast Portland. Nicole Reik, the charity’s founder, who is also in charge of the camp, wanted to start something with pinball. But not an arcade or a tournament. She wanted to offer a service for children which no one else was offering. Pinball seemed like a good fit: Minors aren’t allowed into pubs but pubs are the places where most machines are displayed nowadays. There and at private collectors. So Nicole started to bring pinball machines to children, and it didn’t matter whether this meant delivering them to schools or to a hospital. POP already started in 2011 as a charity and expanded in Spring 2015 with its headquarters. They rely on volunteers, donations and people who sometimes rent the space for their private parties. So far, it’s a success. Pinball Outreach Project’s mission statement is the opposite of the once shady image this form of entertainment suffered for decades: “To improve the lives of children by sharing the history and excitement of the game of pinball.”

The life of Archer got notably improved recently. Thanks to POP, just a few weeks ago, Keith Elwin, the best pinball player in the world, brought a 1976 Royal Flush machine to the child’s home where it was allowed to stay for some time. “He was kind of shy, I don’t know why”, Archer comments on Elwin’s visit while making some more good shots. By now, he has changed tables and went from Stars to Magic. Archer is dedicated to playing pinball. While staying remarkably calm even after some unlucky shots or a quick drain, he surely always tries to rack in as many points as possible to get decent scores. Elwin surely made an impact on him — probably more with his pinball skills than with his quiet personality although keeping calm is also something that the boy is undoubtedly good at. Archer remembers one game in particular where he watched Keith Elwin play. “With the first ball he got a feel for it. Then he completely destroyed the playfield. I mean not literally.” 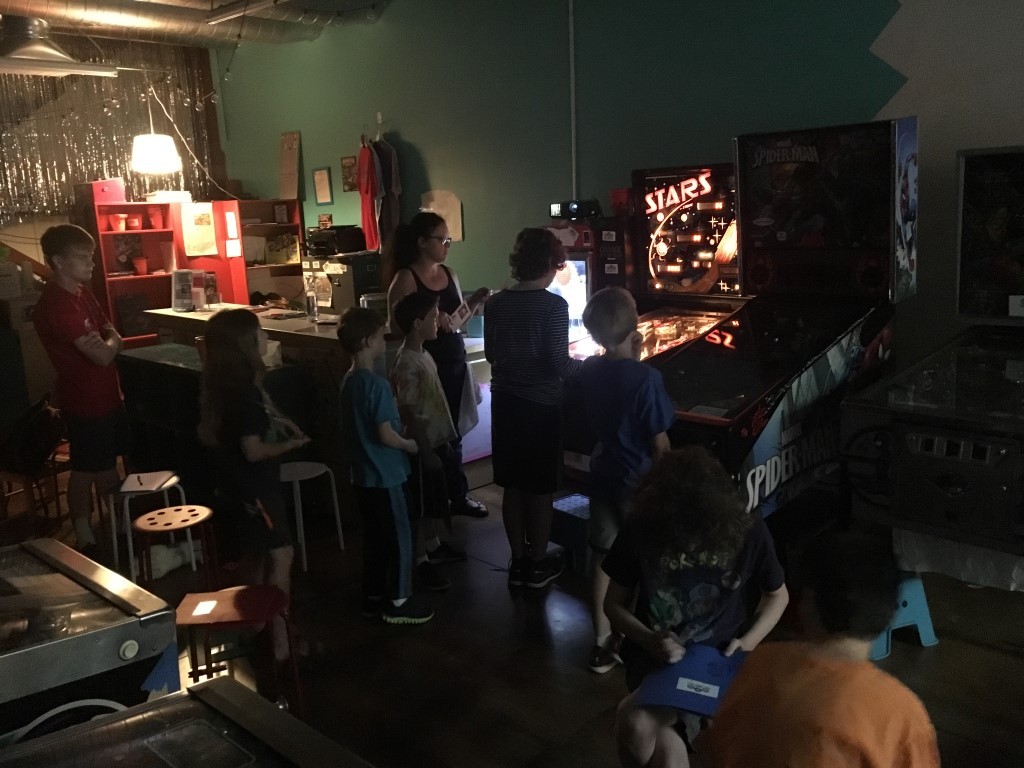 One other pinball destroyer is standing right next to Archer: Colin, a 14-year-old pinball wizard who meanwhile dominates major tournaments all over the country. By now, he almost managed to be ranked within the top 100 players of the world. Colin is not a just a fellow player at Pinball Summer Camp. He is the coach. “It’s a sport although people wouldn’t believe it at first”, he says, calmly, although his ball just almost drained. After a gentle nudge of the machine it hopped to a small rubber post and rolled back to the left flipper. It’s a standard move for someone who knows how to successfully play pinball. But it’s still several skill levels above a commonly experienced competitor in its precision.

For Colin as well as for Archer, the tactile nature of pinball is the main ingredient of the magic formula that separates this game from all the well-known leisure activities children and young teenagers usually immerse themselves in. A pinball machine seems boring and dated enough for the casual bystander. But Colin is far beyond randomly flipping a silverball with two electromechanical bats into creatively crafted contraptions that produce an amusing array of sounds and lights. For him, pinball is about bringing focus into chaos and letting something trivial like a small metal ball tell an epic story. Indeed, pinball tables don’t just have features. Each of them has a theme, too, be it a card game, a superhero or a famous TV series. But although a theme and maybe also a narrative is nice — what really matters are points, of course. And Colin is just great at collecting a lot of them in a short period of time. He won his first tournament in 2013, at age 11. “Pinball has a great crowd”, he says during a little break from flipping. “So many different people play, like doctors or musicians. It just depends on whether you like it or not.” 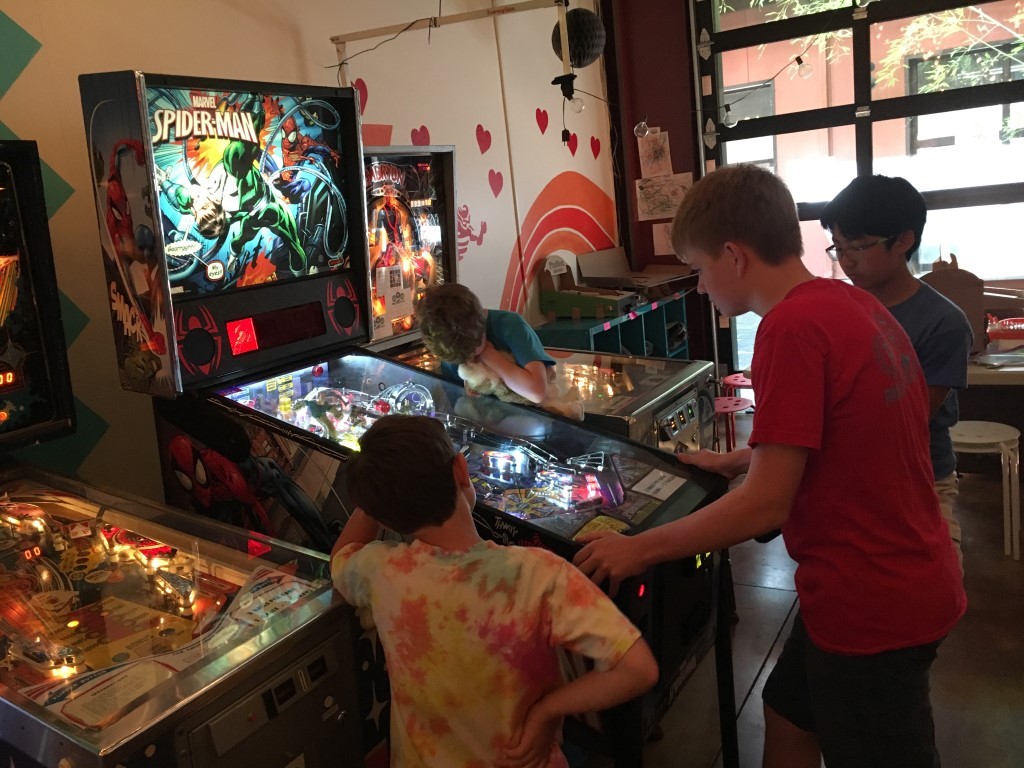 Both boys seem to enjoy themselves, yet for their age, they also sport an unusually professional attitude. With Colin’s experiences at tournaments and so much success with his pinball talent early on, this is somewhat understandable. Archer is a different case though. He has a peculiar way of approaching things, is very perceptive and analytical. Archers unconventional personality and his seriousness definitely resonates throughout the pinball room. He minds his own business and concentrates on his games but also checks on his surroundings and doesn’t shy away from a conversation or a quick-witted statement. Wesley, his father, knows that it was harder for him a few years ago. Archer was a perfectionist who sometimes went too far by taking it out on himself and also on the things he created. Often he would destroy them. It all wasn’t good enough. Archer is just like his grandfather was, Wesley says. But now he accepts imperfection — if also with the side effect of reacting somewhat indifferently toward things these days. Exept when he manages to play a great game of pinball.

“Yes!”, Archer shouts in great joy after finally landing a score of over 100.000 points on Stars. It is the first time the boy shows real excitement at Summer Camp as one would expect from a common child his age more often. All the other children at the camp happily fulfill this expectation. But Archer savors those emotional outbreaks for special occasions. He immediately brings in his score sheet, grabs a Sharpie and writes down his achievement so that this accomplishment won’t be forgotten so easily. Maybe these good scores would become the norm very soon. Wesley thinks he shouldn’t develop his skills too fast though. He taught Archer Chess early on only to pull him away from the game after a while. “He beat a 12-year-old kid who was quite good. It would have been much information for him to process at the same time.” Maybe too much to process without getting anxious when he eventually finds out that he also makes mistakes and is human after all and no robot who can flawlessly take on as much information as it wants in almost no time. But Archer knows that now. He is more relaxed. He has no problems playing pinball for several hours and then just leaving the machines behind in an instant. Archer has other things to do, too: playing with his friends or working on his PinBox 3000 cardboard pinball that he brought home from camp to refine on his table design in the living room.

When Archer has grown up, he wants to have his own arcade room. It should have some classic videogames and at least one pinball machine. He would also like to design his own table one day. “Not with cardboard but instead with lights, maybe half the size of a real machine.” Archer sounds confident when he talks about his plans. Nothing has to happen immediately. But it will eventually happen.

Three days into Summer Camp, Archer’s playing techniques became more precise. Earlier, Colin showed him the classic pinball trick: to nudge the table so that the ball hopefully doesn’t get in between the flippers or into the outlanes. A 100.000 points on Stars are still a rare feat but the chance of reaching them have significantly improved. Archer likes to shake the table. Even if it sometimes results in a Tilt where the machine shuts off and the ball drains. He doesn’t mind. He keeps on going. Archer takes his time but wastes no opportunity. These are the attributes of a professional. The boy drops two tokens into the coin slot, takes on a steady stance and makes his first shot. “I think pinball should be an olympic sport. That’ll be cool.” 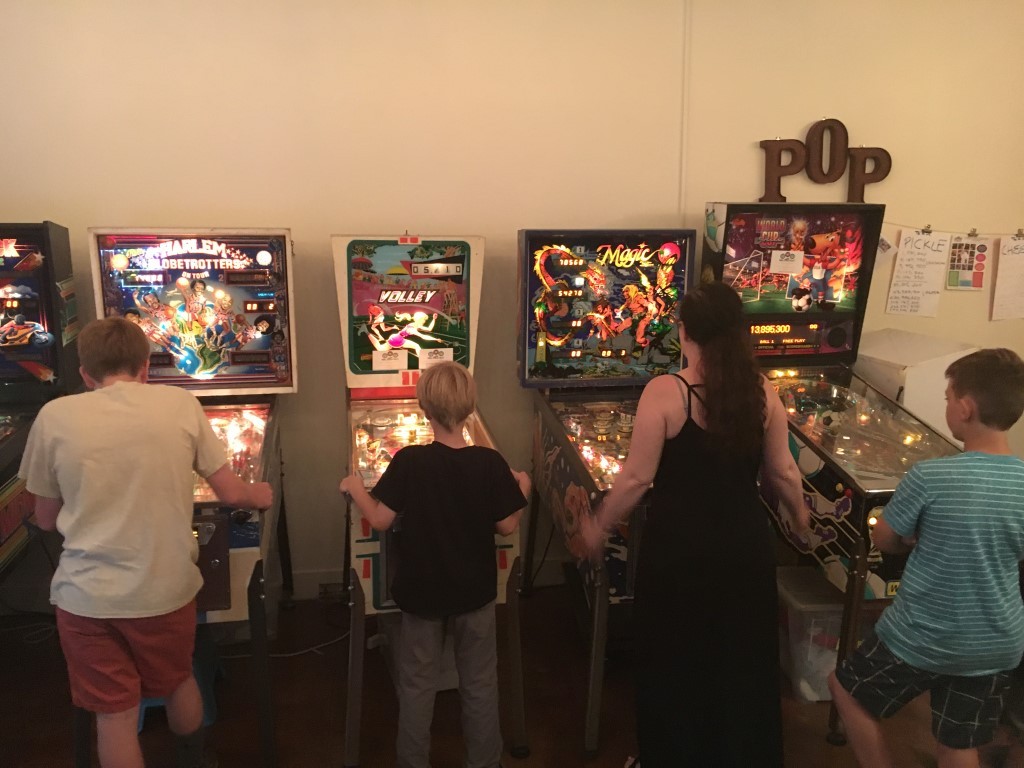 Thanks to Nicole Reik of Pinball Outreach Project for making this story possible. Also to Karl Lind for getting me around the city and introducing me to the Portland pinball community.