When I was a kid in elementary school, I loved playing Top Trumps. I remember an old pack with cars where the cards were smaller than usual. I held that one very dear and still own it, presumably because it was my very first one. Later on, I mostly lost my interest in card games although our family had a tradition of playing Rummy as well as some other more fun card games. Gambling was always shunned for good and when collectible card games became a thing, there were already enough computer- and videogames to geek myself out. 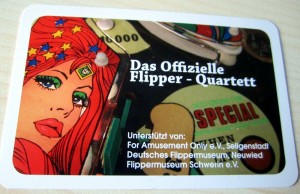 Playing cards and pinball have almost nothing in common aside from the fact that they are sometimes perceived as this grey area between skill games and gambling. When pinball was considered a game of chance by many – up to the late 70ies -, pinball really was a more luck driven game than it is since the modern era started off circa 1978. Just play a few games on some electromechanical machines and compare them to your achievements on newer pins. I am not saying that skill is not a factor in EM machines. But in my opinion, the element of luck is definitely higher there. Fittingly, EM machines often featured gambling themes like casino and card games. After Roger Sharpe’s famous court room performance in 1976 (which, as he later admitted, was also not without luck), everyone was busy presenting pinball as a game of skill rather than chance. That’s when the gambling themes also mostly vanished. 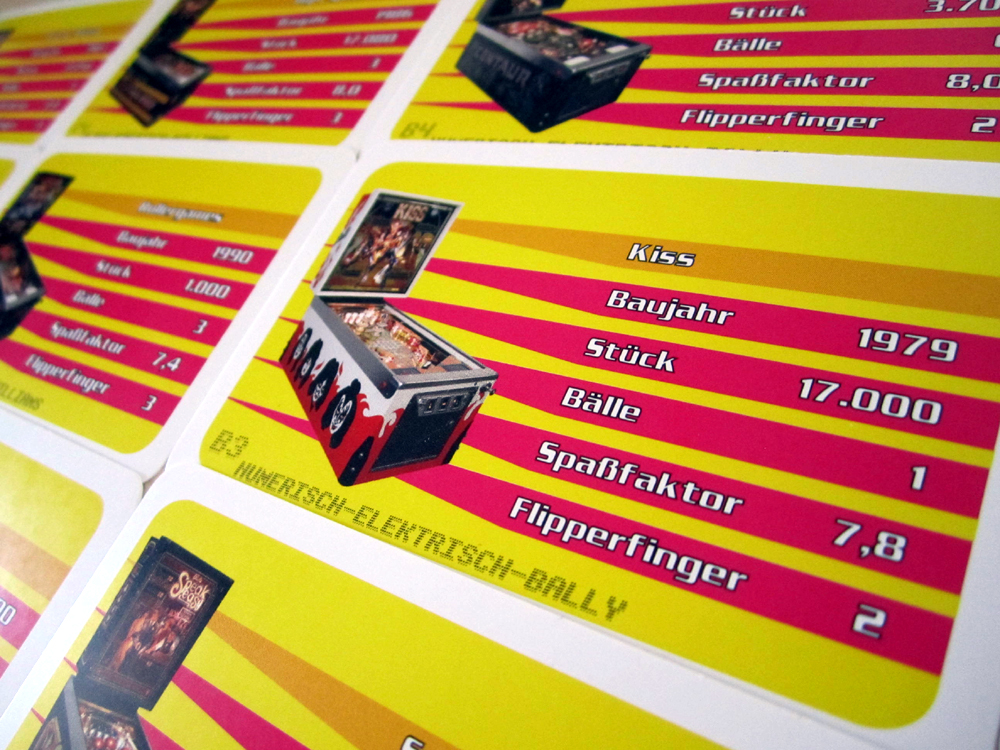 But what about playing cards about pinball machines instead of playing cards depicted on pinball machines? There is really not much to go on as I am not aware of any pinball related card game. Until recently that is, because the German folks from Nerd Dreams put together a Top Trumps game with pinball machines: “Das Offizielle Flipper-Quartett” (The Official Pinball Quartets). If you haven’t heard of Quartets before, it might be because it is a card game that mostly became popular in Austria and Germany in the 50ies and 60ies and is a little bit different from Top Trumps. This game is not about the stats but the quarts, groups of four cards. You have to call for a card from a certain player and thus try to get the most quarts to win the game. The “Flipper-Quartett” is a hybrid of Top Trumps and Quartets as you can basically play both games with it. The game features eight groups of quarts, 32 cards in total, which is common.

Unfortunately, “Das Offizielle Flipper-Quartett” is only available in German. But you basically only have to learn five words to be able to play it: Baujahr (year of release), Stück (units built), Bälle (balls), Spaßfaktor (fun rating), and Flipperfinger (in German, flippers are called flipper fingers due to the fact that the machine itself is called Flipper). The most interesting thing for me are the categories in which the machines are presented on the cards. There are Electromechanical Machines, Early Electronics, Alpha-numerical Williams, Alpha-numerical Bally, WPC Williams, WPC Bally, Exotic Concepts and Exotic Manufacturers. While it’s very much down to the taste of the creators of the game which four tables are presented in those categories, it is an effective method to get a nice range of machines within just 32 cards. The pins are depicted without their legs, which, to me, always looks a little bit odd. Also, the colors used in the design of the cards are very vibrant. The yellow background and the pink contrast color are striking, there is a 70ies-meets-80ies vibe going on. 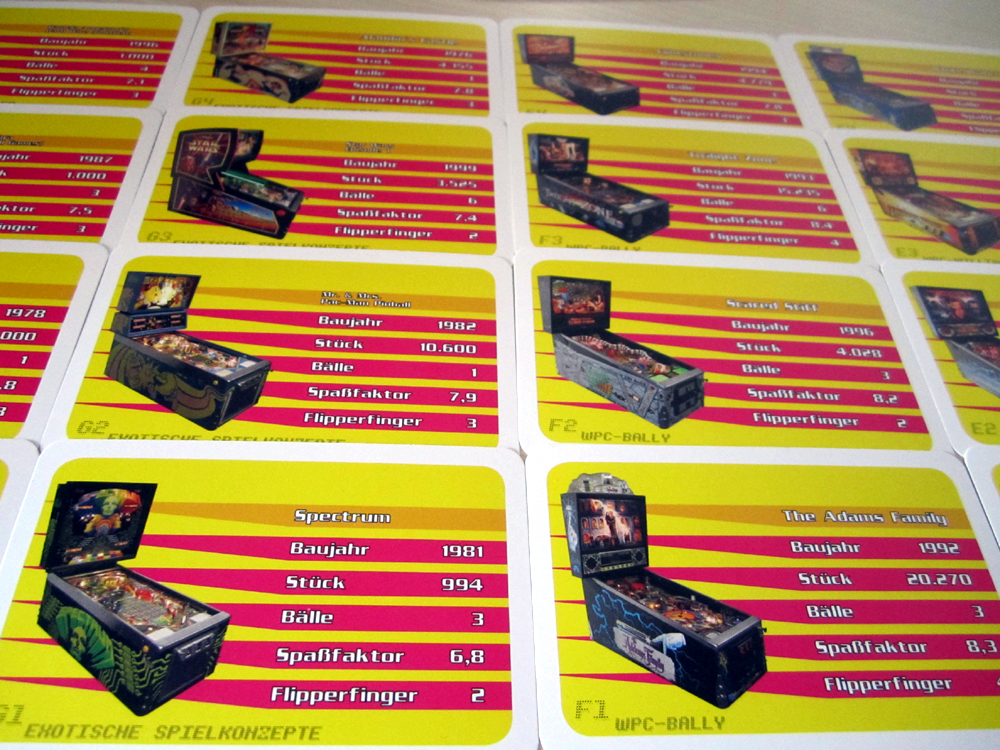 When it comes to the most important features for Top Trumps – the statistics – the game lacks a little bit of inspiration. In many cases, the number of Bälle is 3 (standard play, and two more for multiball) and the number of Flipperfinger are either 2 or 3. This leads to a tie in many cases which doesn’t help the flow of the game. When it comes to Baujahr, players have to decide whether older or newer models are considered better. Stück makes sense, because, well, the more the merrier. The most random category seems to be Spaßfaktor: It’s not possible to come up with an objective rating of a certain pinball design, so you are left clueless as to where those numbers on the cards come from exactly (they seem to be taken from IPDB). Also, most of the cards/pins have a rating of 7.x or 8.x.

“Das Offizielle Flipper-Quartett” is a neat little card game that was made possible because three German non-commercial pinball initiatives joined forces and realized this project together. It’s a nice thing to have and to show to fellow pinheads. In terms of actually playing the game, it leaves much to be desired though. First of all, the categories would need improvement. You could, for example, count the ramps or the stand-up or drop targets for each table and ditch the Bälle as well as the Flipperfinger categories. The photos of the pins could be a little bit bigger, too. So, there is room for improvement which might lead to an update of the game. Or others get inspired to create their own contribution to pinball culture – through a card game or otherwise. So many possibilities lie ahead! 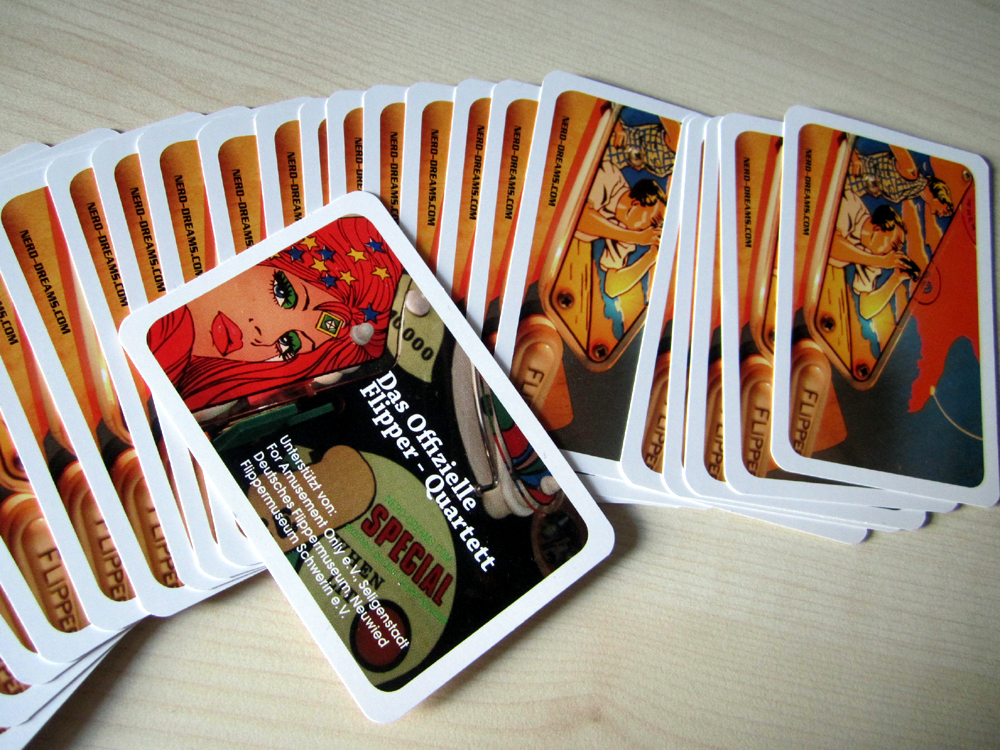