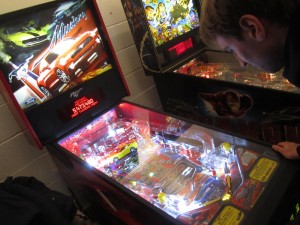 Welcome to 2015! The new pinball year had a good start so far, with the recent announcement of Stern’s new table “WWE Wrestlemania”, designed by industry legend John Trudeau (“Creature from The Black Lagoon”, “Judge Dredd” and many more). In March of 2014, The Ball is Wild had the pleasure to meet up with John for an interview inside the blessed halls of Stern in Illinois, close to Chicago – the hometown of pinball. Markus, a good friend of mine and fellow pinhead, and I were doing what we called a Pinball Tour at the time, travelling from Chicago (and surroundings) to New York and New Jersey and then heading over to Michigan.

Visiting Stern was obviously one of our trip’s highlights. We arranged a guided tour through the manufacturing hall beforehand. But meeting up with John Trudeau when we arrived at the factory was a lucky coincidence which put big smiles on our faces. He is really a sweet guy, outspoken and friendly, and happy to still be able to contribute his lot to pinball culture. Back in March of last year, we talked mostly about the then brand new “Mustang” table (his first design after almost fifteen years), why he renewed his career, how he became a pinball designer in the first place, what the collaboration with Ford was like and how much he plays pinball himself. Also, this interview with John Trudeau was a major influence when it comes to giving this blog a proper name. While reading it you’ll notice why. Enjoy!

Can you tell me about your early career in the pinball industry? What got you started? 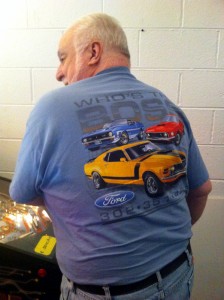 I didn’t try to get into pinball, it just happened to me. I was an offset pressman, a printer. And I just decided that I’m not having as much fun as I’d like to, so I tried something else. I took a job with Game Plan, testing their games. Repairing and troubleshooting them. Because I had some electronics training when I was in the Air Force, they said: Yeah, okay, come on! While I was there, I showed them some designs I had made. I just took it on my own to do this. There was nobody tutoring me at that point. And then they said: Well, we see something that we’re interested in. How would you like to try and learn how to do this? I said: That would be a lot of fun, I’ll go for that! And the rest is pretty much history. I’ve been in the right place at the right time, several times. And it’s just lucky, very fortunate for me.

This is the interesting thing, there is no school or education or a place where they teach you how to become a good pinball designer. So where do you start?

You have to have the desire in there to do something! For me, geometry has always been a very good subject to make things flow together and make one action turn into a different action. And it seems to lend itself real well for pinball.

What changed throughout the last 10 to 15 years in pinball design – for you and in general?

Well, as I’ve been out of it for almost 10 to 15 years, the changes haven’t been that dramatic. I understand that the genre itself was almost obsoleted in many cases. But it stuck, it survived – thanks to Gary Stern and a bunch of other people that helped support him. The changes on here, they’re not that many. I mean, the electronic changes, technology changes, but pinball is still pinball. The object and the fun of the game is the ball. You can’t control it! The ball is wild.

And it should be.

Yeah! It should be. I’m glad that that part of technology hasn’t been replaced. The size of the game has gotten a little longer than those we made in the early 80ies but it’s still 20 1/4 inches wide. And it just seems to be the optimal width for getting a nice selection of shots.

I understand that “Mustang” was the first game of your new career when you started again.

Yeah, pretty much! You’re right. I was given the choice of a couple of different themes, and I said: You know what, “Mustang” looks a little different, let me try that. It wasn’t an easy choice because there have been some good car games out there. And trying to do something a little different was tough. But I think we’ve succeeded.

When you start out doing the design for a game, what are the first steps? Do you figure “I want this particular feature in it that I haven’t seen for a long time” or similar thoughts?

Well, on this particular one, we had a very tight schedule to get it done. And I said to myself: We will do something that we know it works. There are a couple of shots reminiscent in here of other games like the bowl from “Creature of The Black Lagoon” and the five-bank-across-the-middle from “Judge Dredd”. Everything like that – it works. So I’d put them in there and combined it with some older features that I haven’t been seen in a while, like the captive ball. And everything worked! It came out all nice. 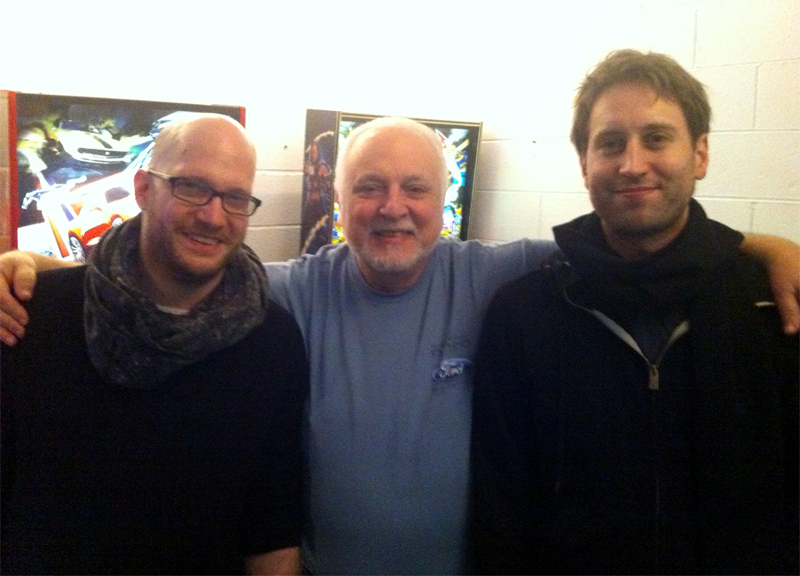 Were there restrictions brought up by Ford when it comes to table design, logo placement, etc.? How much freedom did you have?

Ford was very generous with us. They understood that we are the pinball manufacturers. As long as we don’t tread on their trademark, they would be happy with almost whatever we came up with. I mean, we’ve gone through things like getting the order correct with the red, white and blue on their logo. Basics. But that’s it! Everything else, they loved. With the colors of the cars themselves: We couldn’t make a purple Mustang up here, let’s say. Because that isn’t true to what they actually built. All of these renditions of automobiles you see in the game here are real cars.

So there is no representative of Ford coming in here every day.

Not every day, but we did have a fellow coming down here. His name was Marc, he was a really great guy. Brought us some photos to look at. We got a chance to see the new Mustang model that was coming up before anybody else. But we were sworn of secrecy, of course. And that’s what came out of it. It was a great meeting, a very good blend of talent. They are very happy with us, we sent seven of these games to the Chicago Auto Show and they were really well received! I understand that they were so well received that they want to take these seven games again over to the New York Auto Show. That’s an extra bonus for us – a little more exposure for Stern Pinball.

Who did the artwork for the cabinet and the backbox?

The artwork was done by Camilo Pardo. He was an artist for Ford but he was also a mechanical designer and designed the Ford GT. It was quite a sensational honor to work with him, he is a multifaceted individual and having him do the artwork was really a bonus for us.

What’s the chemistry like here at Stern Pinball? I understand there are also several other oldschool designers who got hired recently.

John Borg is here all along. He is an oldschool designer, but he has been here. Steve Ritchie and myself, we came here not so long ago. Steve has been here a little while longer. Everything seems to be coming out okay.

Do you teach pinball design to younger folks?

I would love to! I would love to see somebody – male, female, doesn’t matter – come in with some ideas. I hope that the new generation of designers comes in because we’re a little long in the tooth here as far as the design staff is concerned. The only one older in this building than me I think is Gary Stern.

Why are you still doing this? You could enjoy retirement.

The reason I’m still in this is because it’s fun! I really enjoy doing this. I think, if I quit doing this or something like it, I’ll probably just croak! 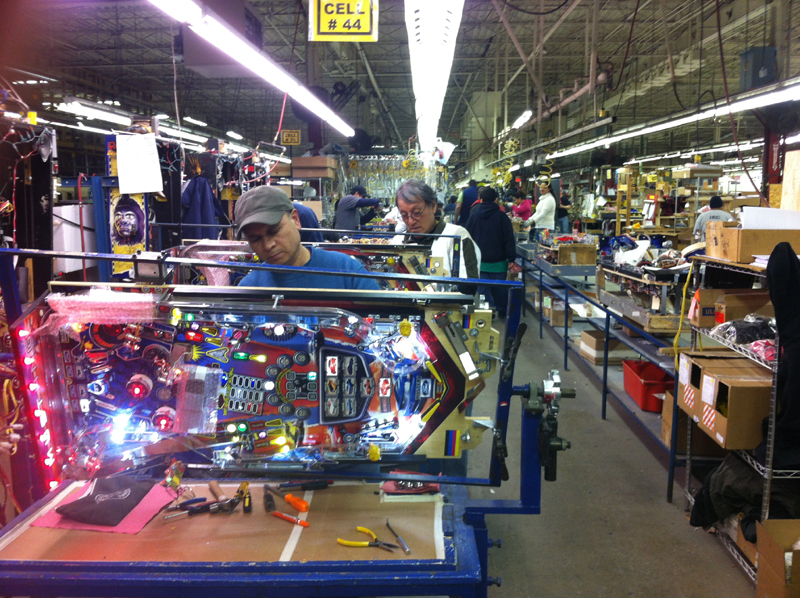 One great thing about pinball is that age is not really an issue.

Do you still play pinball?

I play as much as I need to. I enjoy playing a game. I am not what you would say a competitive pinball player. I have my moments, I do have some good games. But for me, the love of the game is designing it. Laying out the game, putting things in position and making sure that things work right. And when I see everything all clicking and running really smoothly, I’m really happy and I’m ready to go to the next one.

Do you have pro players coming in here at Stern playing your game so that you can check out if some feature really works or not?

In a way, yes. We do have some people come out. The Sharpe Brothers come in and some of the other fellas. I guess, Trent (Augenstein) comes in, and we have Lyman Sheats here – he is no slouch! So, we have some good players. They’ll beat it up!

When is your work done on a machine, on a design? Are you still contributing something to a game when it gets manufactured or are you already working on your next project?

The game is pretty much done, except for things we find when we come down the manufacturing line. Then we just address those things as needed. But when we hand it off to manufacturing, it’s done, it’s ready to go.