New pinball videogames with original ideas can show off a lot of innovation. Throughout the last years, we have seen wonderful games such as “Rollers of the Realm” or “Momonga Pinball Adventures”, games that perfectly demonstrate that video pinball can not just shoot virtual silverballs but can also tell interesting stories, introduce characters, show off exciting combat and even come up with its own RPG party system. Still, maybe also due to their experimental nature, video pinball games are still quite rare. So it’s always a pleasure to know when such a game is in the works. This happened with “Yoku’s Island Express” a couple of years ago when the first gameplay trailer arrived. The game set out to be a mixture of discovering a labyrinthine island with a dung beetle and its dung ball that, obviously, served as the pinball. The setting alone was reason enough to looking forward to this unconventional title.

In late May this year, “Yoku’s Island Express” arrived on Windows, Switch, PS4 and Xbox One and has so far gotten enthusiastic reviews with the reviewers mostly praising the game’s clever mixture of adventure and pinball elements, its unique artstyle and the playfulness. A month before release, on the 25th of April, I sat down with Mattias Snygg, co-founder of Swedish indie studio Villa Gorilla, to talk about the long development process of their debut game and how pinball was merged with traditional action-adventure gameplay. We met in a small gaming bar in Berlin where some physical pinball tables were set up next to the computers where you could preview play “Yoku”, just to get journalists in the right mood for pinball. 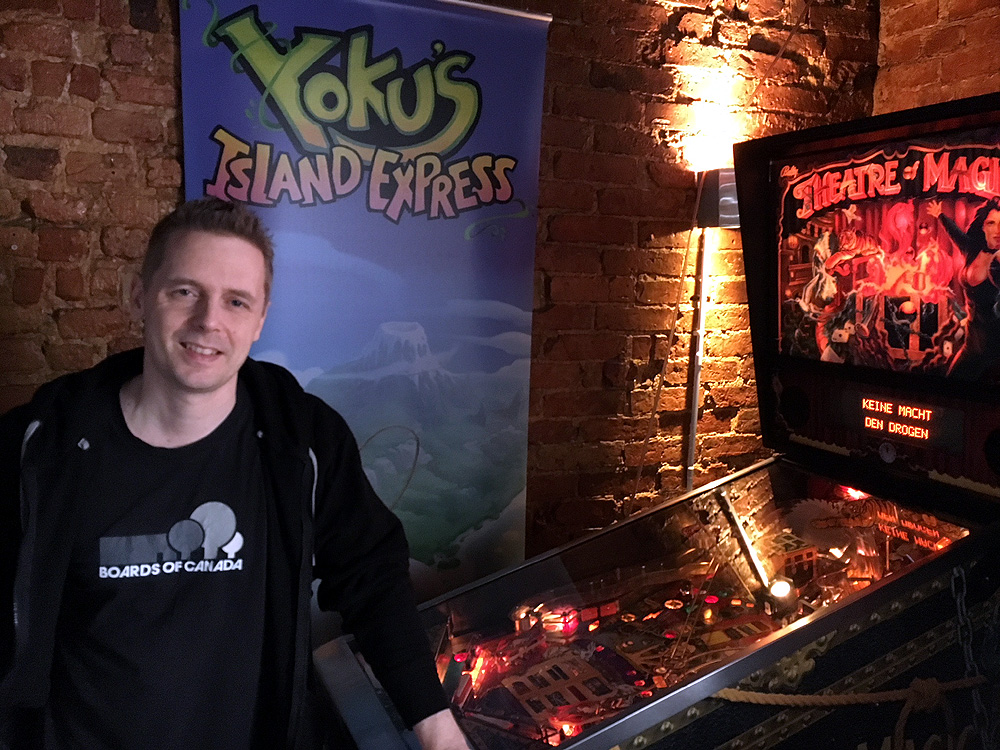 My name is Mattias Snygg and I‘m an artist living and working in Stockholm, Sweden, and together with Jens Andersson we have created a studio called Villa Gorilla. “Yoku’s Island Express” is our first game. We have been working on it for four years.

So your first project as Villa Gorilla is a pinball videogame. How did your studio come about and why pinball?

Both Jens and I made games before, we worked on Triple A games. I mainly worked on first person shooters with a lot of blood and violence and that sort of thing for many years. Then I decided to get out of this world for a bit and focus on art. And it turned out that Jens, who I’ve known for many years, came back from working at LucasArts in the US. So we decided to do something together.

Pinball is a thing that we both like. We had the idea already about making an open world pinball game. It sounded funny and interesting, everybody became interested when they heared it and realized that it’s a different thing that we haven’t seen before. So we got to work on the project a little over four years ago, trying to figure out how this game could be designed. What kind of mechanics do you need to make it work, and is it fun?

Can you share a little bit about the design iteration process? With a common (video)pinball game, you usually have one table or maybe a couple of tables attached to each other. And a Metroidvania-style game with pinball really is a new idea.

It’s gone through a lot of iteration. One of the earlier versions was stringing pinball tables together, as you said. It was very action-heavy with an intense gameplay all the time. Gradually, we introduced areas that are more focused on platforming, exploration and adventure. You had to talk to characters, too. We found that we’ve discovered a really nice mix: an overall slower paced gameplay mixed with some faster paced areas. It’s a good ebb and flow. But it took a while to find that formula.

On first sight, the art and the game concept of “Yoku’s Island Express” seems very family friendly, maybe even specifially designed for smaller children who wouldn’t need that much gameplay finesse. But when you look closer, you realise that the game has a very finetuned design. Why did you choose to make the game visually so colorful and vibrant?

For me, it was basically necessary that the game should be colorful and vibrant because I had come from making games that were very grey and dark. So I kind of yearned for the opposite. Also, the game does have its scary bits and its fair share of dark shades and ambivalent moments, but just not too much so that everyone can find something she or he likes about it.

Let’s come back to pinball and all of its main features, mainly flippers and bumpers. It must have been hard to incorporate those features into a Metroidvania game where you are usually jumping and shooting. How complicated was it to put pinball elements into this genre?

That was the big part of the work, I would say. There are so many subtleties to take into consideration. Take for example the fact that we have a wide screen format that basically goes against the upright orientation that is common for pinball. We experienced a lot with angles to accommodate for that. Then we added game objects like flippers that shoot you straight up or down. We also have those little tunnels that give you a choice whether or not to switch to a different area. Those things helped to smooth out the movement for the player. Everything finally fell into place when we started getting a critical mass of these little helpers into our game.

During my preview play, I was immediately reminded of “Sonic Spinball”. This might have been one inspiration for “Yoku’s Island Express”. What is your history with playing and examining video pinball and pinball in general?

I’ve been playing video pinball since the Amiga, since the first demo version of “Pinball Dreams” came out. I played the 5-minute-demo over and over as a kid, just the one level. I don’t have a big history with Sonic though, but we did look at a lot of different recent pinball games, just to see what was out there and see if we could learn something from them. We obviously could, but ultimately, it mainly took a lot of grinding and throwing ideas, mechanics and content away: properly fine looking and working levels were scrapped because they weren‘t fun enough. So we were kind of hard on ourselves in terms of making sure that what’s in the game also really works out.

Let‘s talk about pinball simulations vs. pinball videogames. “Yoku’s Island Express” is obviously no simulation. Still, how did you come up with a physics engine needed for ball movement?

This was also the result of a lot of iteration, figuring out the perfect physics setting. We are using our own 2D physics engine. We tweaked around a lot with the gravity of the world, the friction on different surfaces, how much spin the ball should retain and all that. But if you want to be able to build levels, you have to settle on some parameters. Because if you keep tweaking those parameters, the older areas of the game world that you already built maybe won‘t work anymore because the shots are different. Eventually, we found a setting that was decent enough. We tuned the ball physics in a way that fits to the game world at every moment.

So you started to design levels strictly after you set up the parameters of the ball physics?

A little bit of both – we went back and forth with that. We also reworked older areas that broke down because we changed something. Eventually, we reached a point where we felt that the ball physics didn’t improve anymore. Then we settled on it and made the most of it. 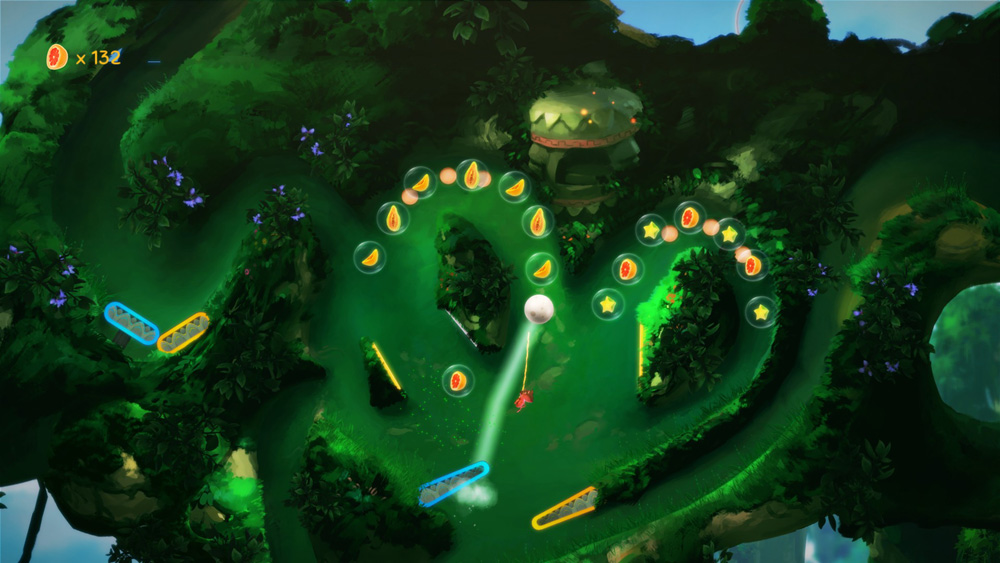 How hard is it for people to accept that they are not able to jump in the game? This is something that is very important for a lot of people in that genre sans pinball. And when they see a game like “Yoku’s Island Express” they want to press A and jump – and then it just doesn‘t work!

This is not a feedback that we‘ve gotten that much actually. It seems as most people accept the parameters of this world because you don‘t really know that to expect from the game when you start off. But I think the game mechanics start to make sense quite early on and by then, most of the players hopefully won‘t miss anything.

Although pinball has become more popular throughout the last five years, it is still mostly a niche. With video pinball, I’m never really sure just how attractive pinball mechanics are for most players. You obviously did a lot of testing and iteration with your game. What did you find out in terms of player reactions to flippers and bumpers?

People have mostly been pleasantly surprised by them. It delivers on the premise that we did something different with this game in the first place. So the response on the gameplay has been really positive, we’re excited about that.

Four years of development time is quite a lot of time for one game. Of course, you are a small team, so things take more time. Can you elaborate a bit on the risks and rewards of such a project? How did you cope with the uncertainty of the success with such an unusual game throughout development time?

At first, it was just Jens and I, but we grew a little bit along the way. We peaked out at seven people working on the game simultaneously. And sure, there is a tremendous amout of personal risk involved. I don’t know what else to say, really … I hope we get our money back because otherwise, we’re screwed! (laughs) If it does well enough though we can keep on working on the game and hopefully do more content.

But what was the initial schedule when you set out working on the game? Was the original intention to work on it for maybe two years and then the project became bigger throughout your journey?

Actually, it was always just “one year left” – even when we started! It took a while to arrive at the scope of the project that we now have. We allowed ourselves to screw around a little bit because we felt that we had it sort of working at one point but decided to not show this older version of the game to anyone at all and scrapped it. We felt that there was something missing and we could already pinpoint things that we wanted to change. We allowed ourselves the luxury to be picky about gameplay details. After all, when you have your own company, it’s your own responsibility and your own time. Of course it‘s a different scenario when you are working in a big studio where, most of the time, you already have a publisher attached who is expecting results. Being independent was a really pleasant experience for us.

Speaking of publishers, “Yoku’s Island Express” gets published by Team17, a very classic games publisher. How did this work out for you?

It‘s been great. We‘ve been with Team17 for a little over a year now and they helped us out with a lot of bugfixing and marketing. Also, we’re launching on four platforms simultanously and they have infrastructure to take care of that. They know a lot about what we need to do to make that happen. Many of those things like porting take a lot of time for a small studio to be able to handle well, and since we teamed up with Team17, we could offload a lot of that.